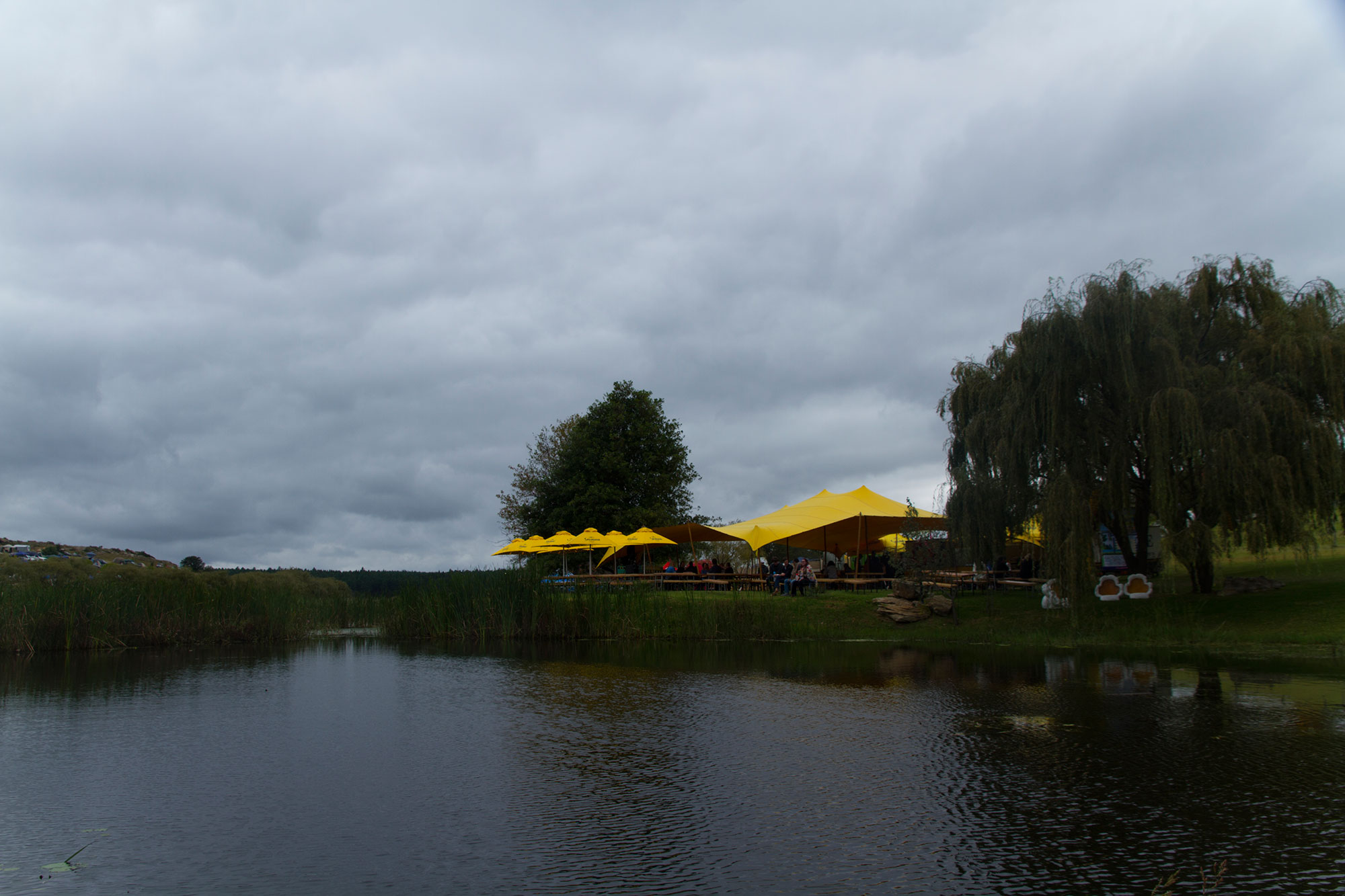 Passport to the Republic of Mieliepop 2017: Renewed

It’s not every event where you go from watching Shortstraw, to Boargazm, to PHFAT, to Mr Green in the Rave Cave. Hell, most events don’t even have a Rave Cave. Or a nice dam surrounded by grassy hills. Or a boutique festival vibe, with minimal crowds and queues, fancy food stalls, warm showers, and more than enough camping space. That’s why The Republic of Mieliepop is something special. 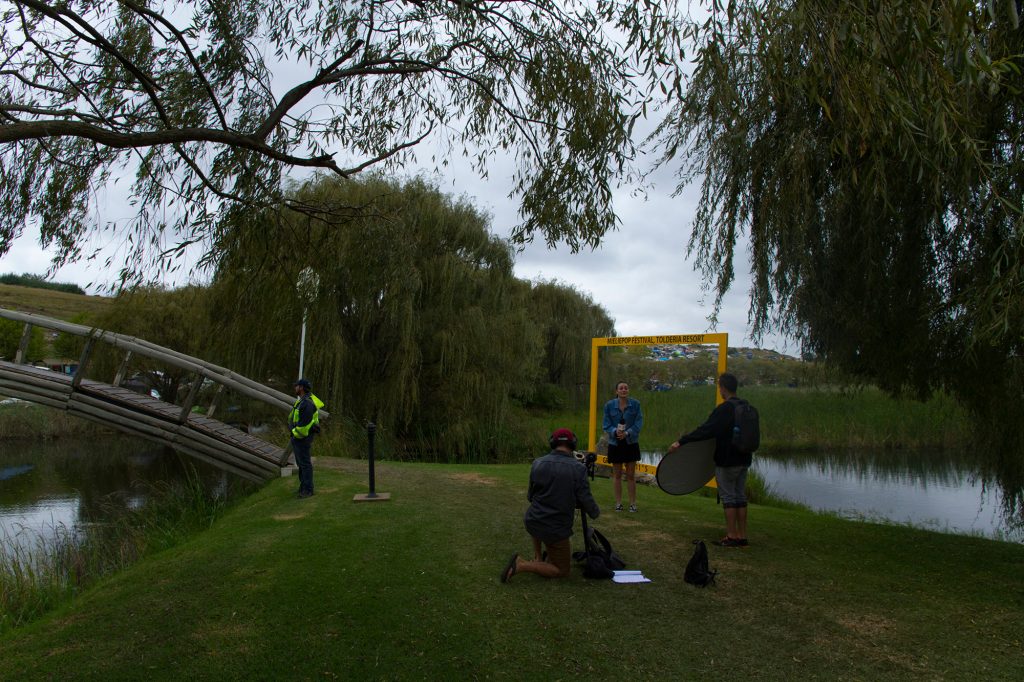 Mieliepop takes place at the picturesque Tolderia resort in Mpumalanga – just East of Ermelo. It’s a comfortable 3 hour drive from Pretoria or Johannesburg (just a little out of the way if you live in the Centurion/Midrand area equidistant from the N4 and N17 highways).

Wisely, for those of us with day jobs, the festival started light on Friday night, with only DJ sets at the bar. For a faux long weekend like this one (the Tuesday was a public holiday), it was great that the festival only really required you to take one leave day on the Monday.

I decided to only leave on the Saturday morning (nobody likes setting up a tent after dark), and the schedule allows for this, as bands only started at 12h30 that afternoon. And on Saturday, the weather was perfectly warm and sunny for most activities that Mieliepop offers: a pool, a dam, cocktails, cold beer, ice lollies (with or without alcohol), and relaxing music in the shade of a Willow tree. 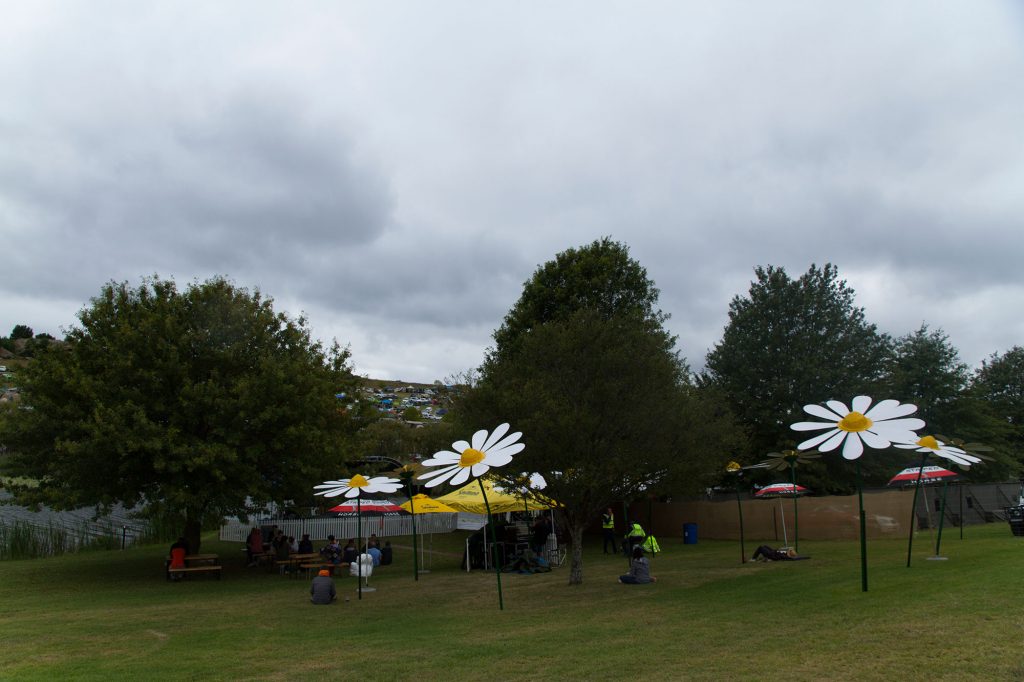 Music at the new Cool in The Pool deck area started at 11AM daily, the Willow Tree Stage (with trees and pleasant flower-umbrellas) started at around midday, and the main stage – where there’s less shade – conveniently started at 15h45, when Cool in the Pool died down. It’s a relatively easy-going lineup, with a tiny overlap between stages, so you’re able to hop in-between if you want to catch a glimpse of every act. No glass or coolerboxes were allowed in the festival area (campsites only), so it only required a little planning (decanting and/or plastic/cans) to spend minimal time going back and forth. Same goes for braaiing – no fires were allowed in the campsite, but (a) gas braaiers were fine, (b) Braai Boy had a dedicated braai area with set times for braaiing, (c) the variety of food stalls were super convenient – although most of them seem to have run out of stock of something at some point during the weekend. 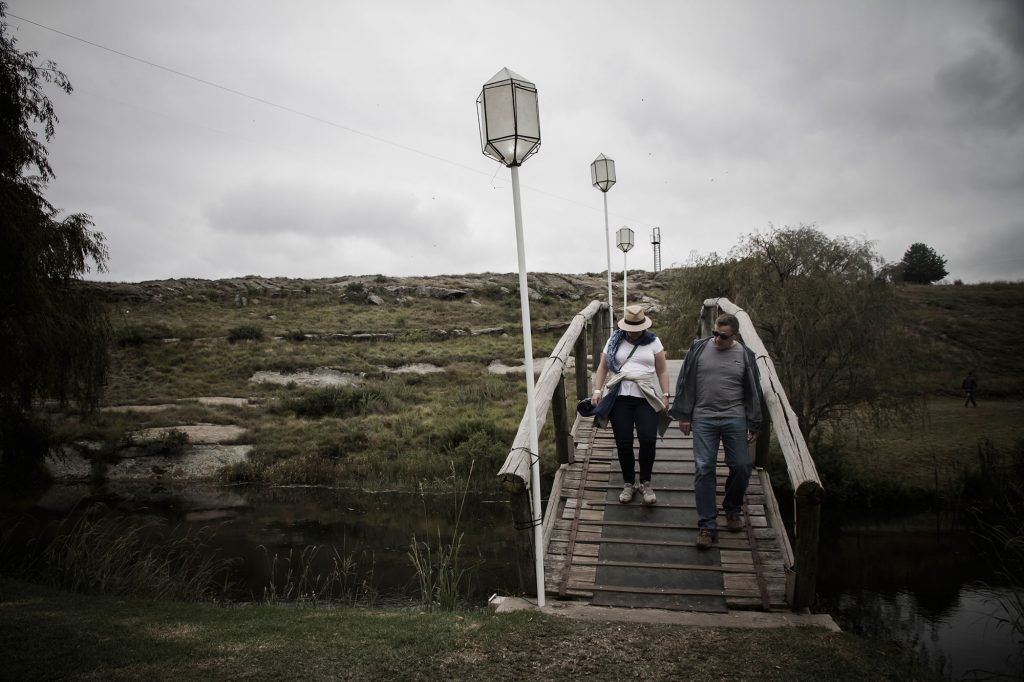 The bands playing the stages were all top-class (just like last year, everyone raved about the quality of the line-up), and an impressive mix of styles and genre. While mostly centered around rock, music included adventures into hip-hop, pop, indie, electro, folk, blues, punk and metal, without going so far to be outlandish or weird (okay, Boargazm probably qualifies as both those adjectives, but that’s exactly the reason most festivals have more than one stage – and why Boargazm plays a you-can-go-to-bed-if-you-really-want-to timeslot). 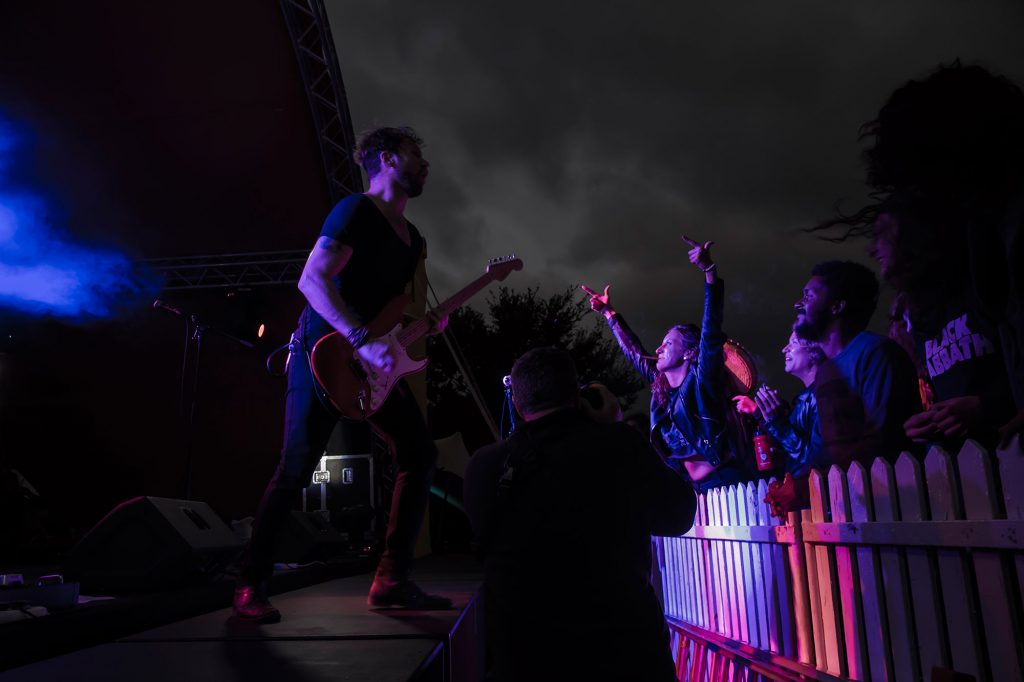 There were a handful of kids to be seen at the event, and Mieliepop is definitely one of the more family-friendly festivals I’ve seen. I can definitely see my 60-something parents enjoying it – I also spotted a grey hair or two throughout the weekend.

A difference between this festival and last year’s edition is the lack of craft stalls – last year had clothing/hat/accessory stalls, which made for great casual browsing and souvenirs to take home.

On the other hand, the addition of Striped Horse Craft Beer (especially a stall next to the Willow Tree stage) was a great extra bar option. 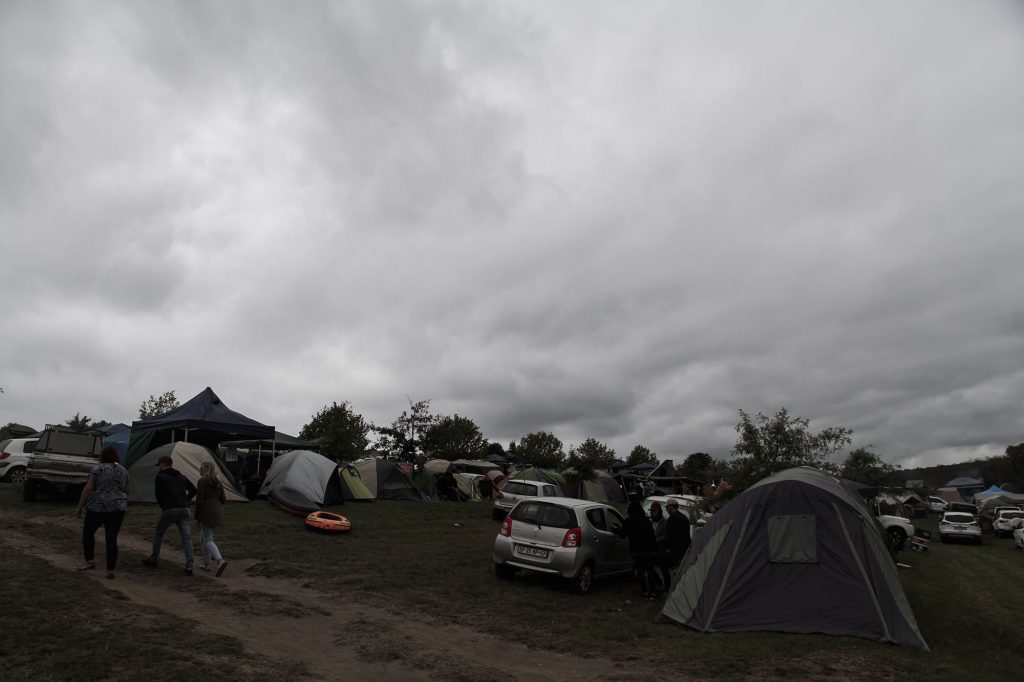 The Saturday’s sunny weather didn’t last, and the Sunday was cloudy, cool, and a little gloomy. Tip: Remember to pack enough warm clothes for next year, to allow for maximum partying. Luckily lovely weather returned on Monday.

There was also a bit of a hickup with our showers (in the overflow camping area), but this was dealt with fast, and warm, comfortable showers were made available (at limited times) and weren’t crowded. The portable toilets were also surprisingly clean (compared to most festivals).

Mieliepop’s famous barge (that offers 30 minute rides on the dam throughout the day), often featured comedy acts this year that spiced up the views – featuring the likes of Robbie Collins, Deep Fried Man, Werner Cloete, Alfred Adriaan, and more. 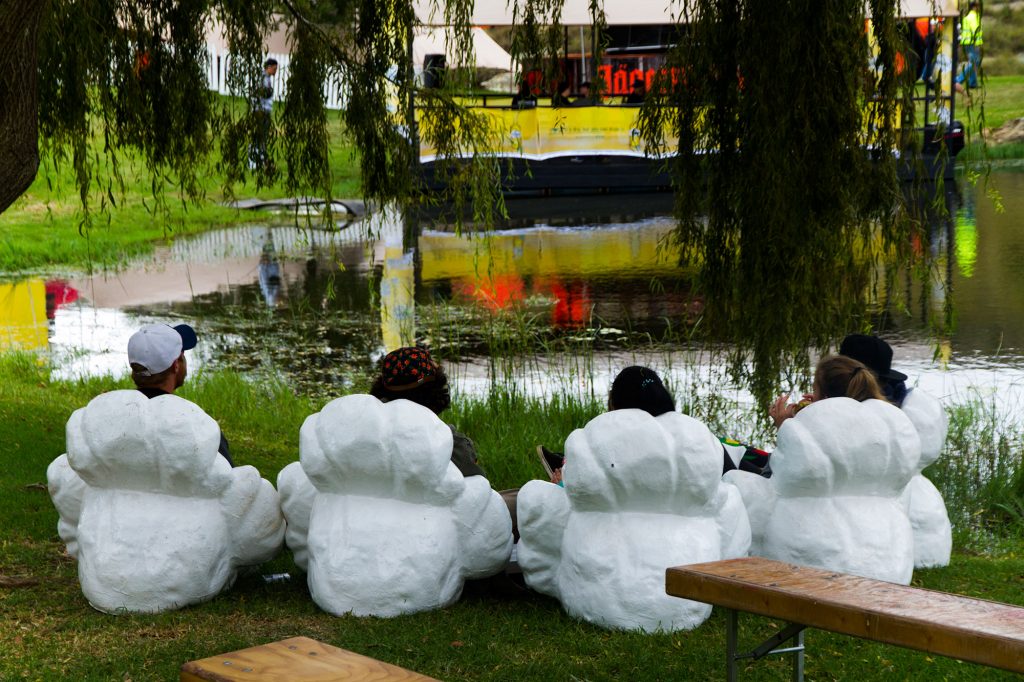 The Republic of Mieliepop 2017 was once again an amazing experience, a well-organised festival, with a great line-up in one of the best locations. So get that passport renewed, get your tent ready, cause I’m already planning my trip for next year!