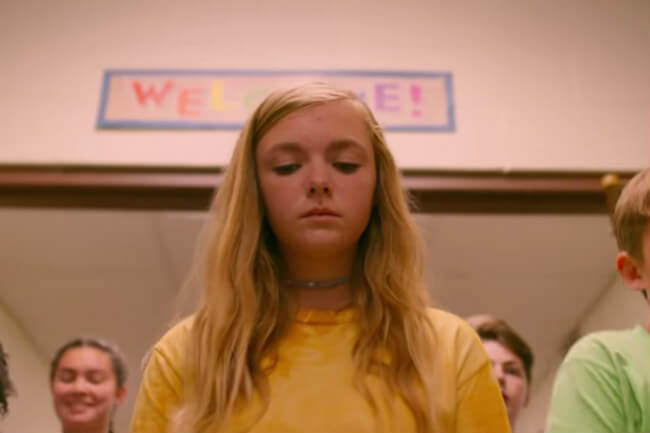 22 February 2019 Off By Floris Groenewald

I’m pretty confident that nobody under thirteen is going to read this review, so you’ve been there and done that. Probably in Eighth Grade. In a South African High School, rather than the final year of Middle School as is portrayed in comedian Bo Burnham’s debut as writer-director, Eighth Grade. But would you ever want to go back?

Because in a way, Eighth Grade invites you back to experience all the awkwardness and anxiety of teenage socialising, vicariously via Kayla Day. She was voted “most quiet” at school, and makes YouTube videos with life tips, but her father might be her only viewer.

Apart from the social obstacles (like liking boys or trying your best to be less ‘quiet’) and overall coming-of-age plot, Eighth Grade is a fascinating look into the lives of modern teenagers, with texting and social media featuring heavily without judgement or condemnation. It absolutely places the audience in Kayla’s shoes, and we are forced to experience her anxiety and vulnerability firsthand.

But despite the realistic treatment of her internal life, there’s plenty of humour to balance out the angst, fear, and generational gap between Kayla and her father, without undermining the seriousness of the protagonists’ emotional journey. Similarly, her open confidence when broadcasting her thoughts onto the internet in her bedroom is vastly contrasted with her behaviour at school, but it reads true as a rounded portrayal of a person. It could easily have fallen into the trap of showing us a teenager from an adult perspective.

I think that Eighth Grade has a surprising amount in common with last year’s Lady Bird —its main target audience (young people and parents, I guess) will probably get the same “awww aren’t parent-child relationships special” warm feelings from it, but at the same time it’s making Charlie Bartlett-like observations about anxiety and social pressure, and presenting a narrative that might remind you of The Edge of Seventeen, but with a realistic approach instead of a Hollywoodised witty motormouth taught by Woody Harrelson.

One scene feels specifically relevant and edgy in a post-Weinstein world, but would probably have had the same effect without being framed by #MeToo. But regardless, it’s an important subplot to add to that topic, and include self-confidence and peer pressure into the conversation.

Ultimately, that’s a big part of how Eighth Grade functions: it portrays characters, situations, and emotions from the perspective of the Eighth Grader, and has the potential to ignite conversations about anxiety, social challenges, and peer pressure without being preachy, judgemental, or exaggerated. It’s a heartwarming, honest, and occasionally funny look at teenage life that’ll probably appeal most to (young and old) people who didn’t quite fit in at school — which as far as I can tell, seems to be most people.