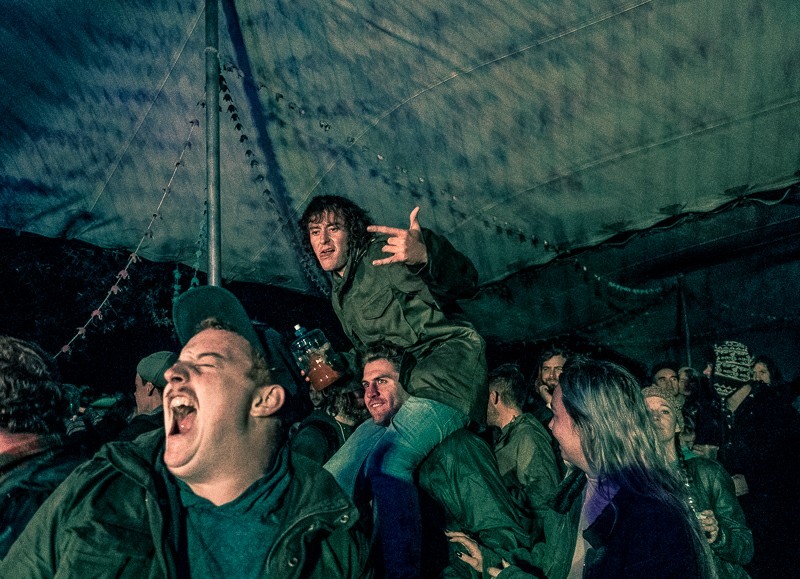 It’s your third year in a row going to Mieliepop, so you have a pretty good idea of what to expect. What to pack, where the good camping spots are, what time of day to go for a booze cruise, et cetera. But then, just a day or two before the festival, some horrible weather predictions start rolling in…

I’m not much of a summer-and-sun person to begin with, but music festivals are some of the rare occasions when I venture outdoors under a layer of sunscreen in exchange for cold beer and good live music. But Mieliepop 2018 turned out to be a little wet and muddy. So much that the roads into Tolderia resort, were extremely hard (sometimes impossible) to travel, and this caused several acts on the Friday to be late or rescheduled. 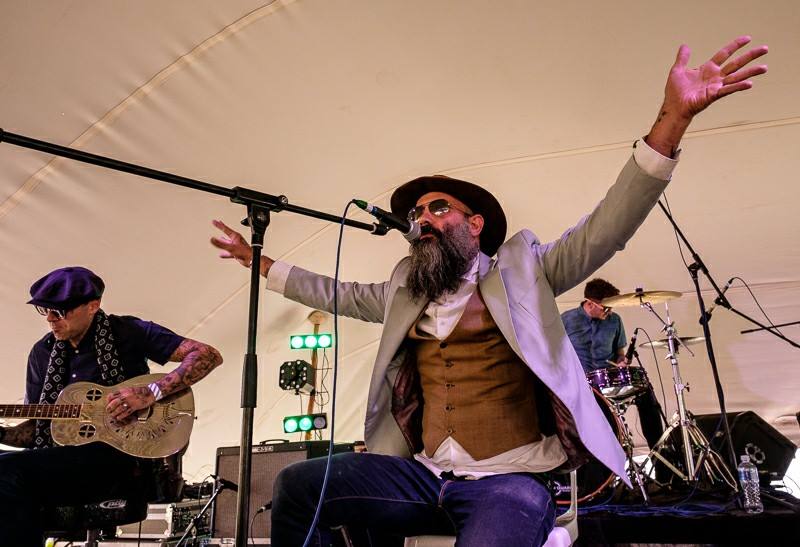 Most attendees either prepared appropriately for the constant rain and cold, or embraced it — facing the muddy paths barefoot and laughing about it. Logistics-wise, the event organisers took several measures to make up for the weather: Big tents were set up over both stages and the audience areas directly in front of them (these could even have been useful in previous years, to shield sensitive skins like mine from the harsh midday sun), and straw was spread across the high-traffic path between stages and in front of the food stalls to help combat the constantly deepening mud.

As always at Mieliepop, the food stalls were high-quality — fitting for a ‘boutique’ music festival that provides more than a boerewors roll: everything from Greek shawarmas to gourmet fried chicken to paninis to mexican street food. And while the ice lolly stand wasn’t as popular as usual, the coffee stand made a killing. 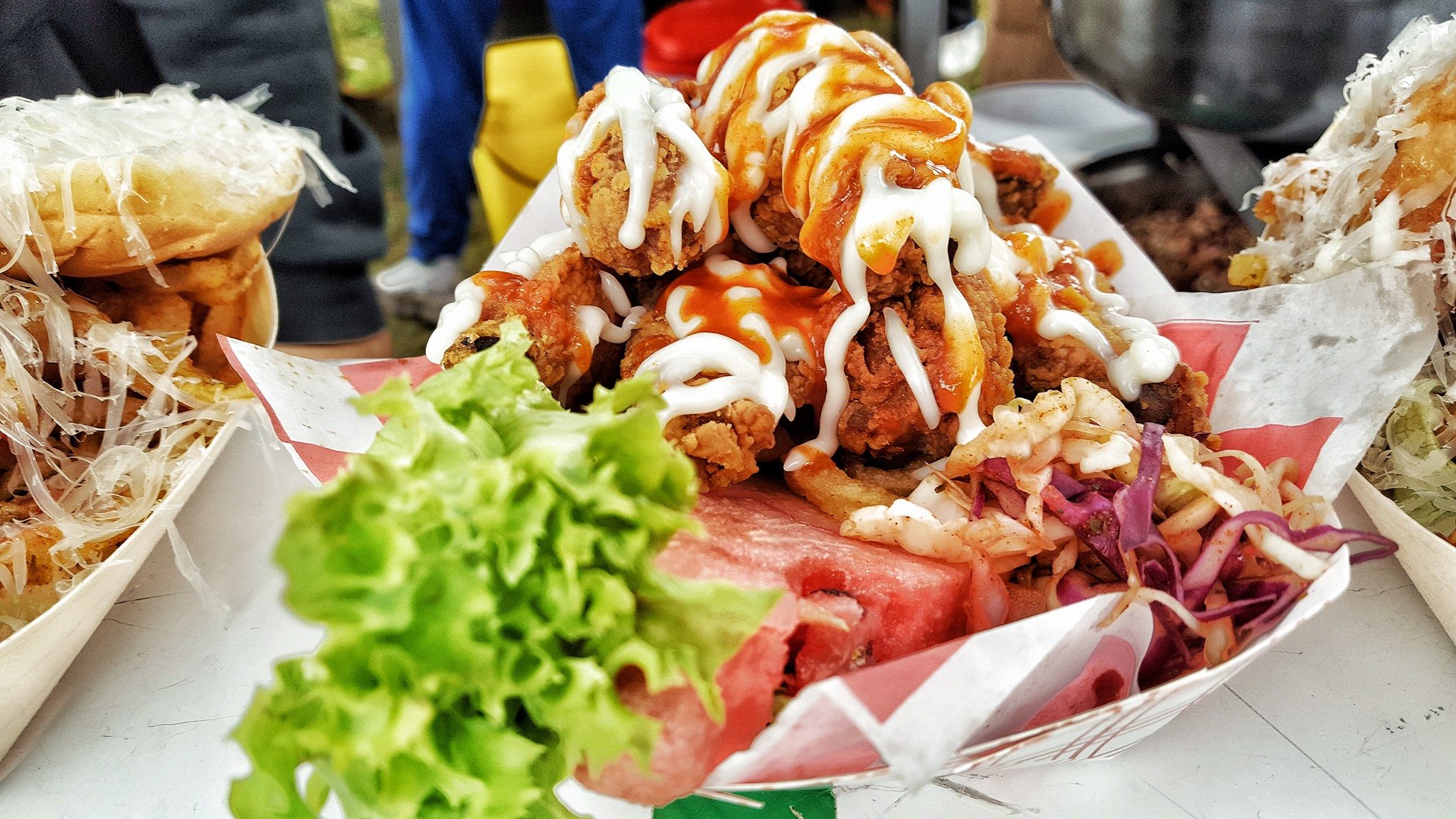 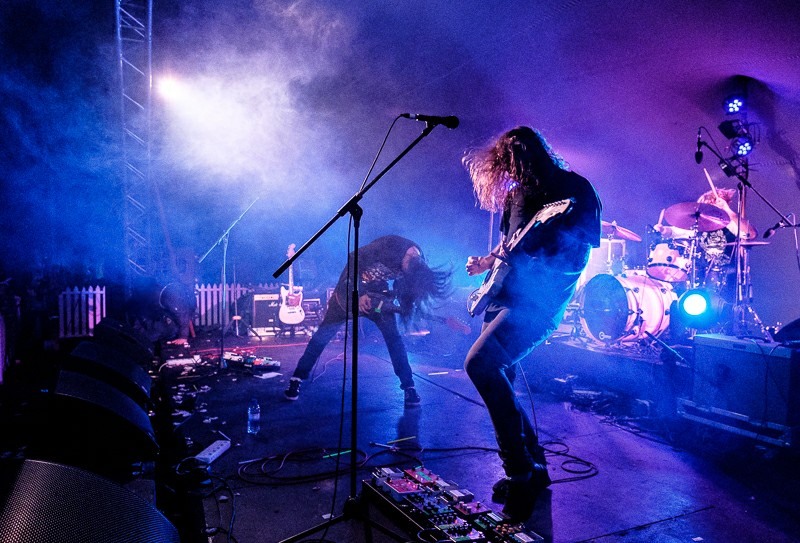 The obvious ‘headline act’ of the festival was DZ Deathrays, all the way from Australia. I have to confess to not knowing about them before their Mieliepop booking announcement, but it was clear that they have a ton of fans — probably a good couple of new ones too. Towards the end of their set, Cortina Whiplash started playing in front of a tiny group of twenty or so – apparently the only ones willing to tear themselves away from the big international act — though the audience soon filled out when DZ Deathrays finished.

For me, that specific scheduling conflict was a bit odd and probably avoidable under normal circumstances, but the weather had severly messed with the pre-existing plans. Because of the entrance roads, a couple of bands barely made it to their slots in time, and others failed to. We only found out afterwards that Moonchild Sanelly and Femi Koya ended up playing later slots to make up for their missed ones earlier. The flipside of that situation made for some pleasant surprises — Hellcats played an extra impromtu slot on Friday to keep the main stage busy. 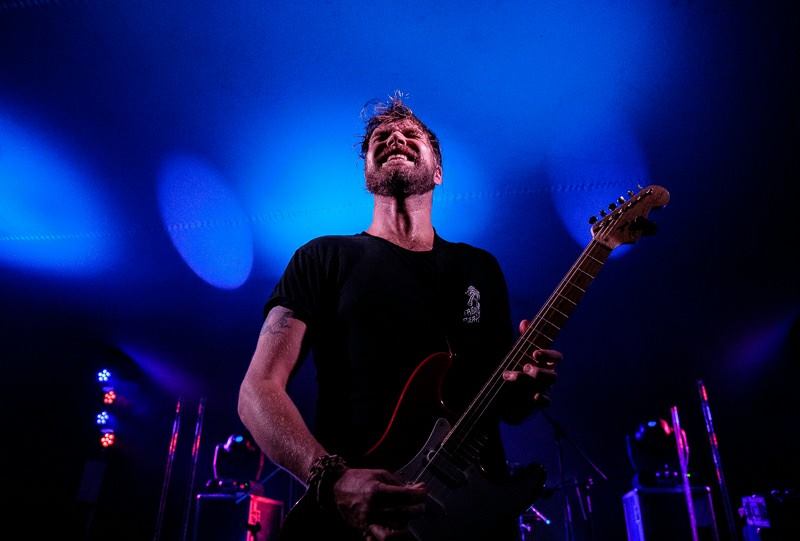 But my favourite part of the lineup wasn’t the big, familiar bands. As usual, Mieliepop managed to book an incredibly diverse, and top-notch lineup with groups like Sun Xa Experiment, Deon Bakkes and the Stolen Horses, Luma and Apocalypse Later representing various different genres and cultural corners — not to mention everyone from Haezer to Trancemicsoul to DSCO Cam to Nick Hamman & Lil Bow on the various decks, and a daily comedy lineup to lighten the weather-based blues featuring top notch comedy from Nina Hastie, Leah Jasmin, Warren Robertson, Mum-Z, Alyn Adams, and Thabiso Mlhongo.

I’ve seen Werner Bekker before, and he’s been around forever, but this was apparently his first festival appearance, so his inclusion here is totally fair. Check out his brand new music video:

Van Pletzen, the new group by Peach van Pletzen (Yesterday’s Pupil, Bittereinder), and Matthieu Auriacombe (Hello Beautiful) is all about throwing worries and pretension out the window, and just having fun. The inclusion of super talented rapper Early B as guest performer in their set (and on their album) was a great choice to add some variety. 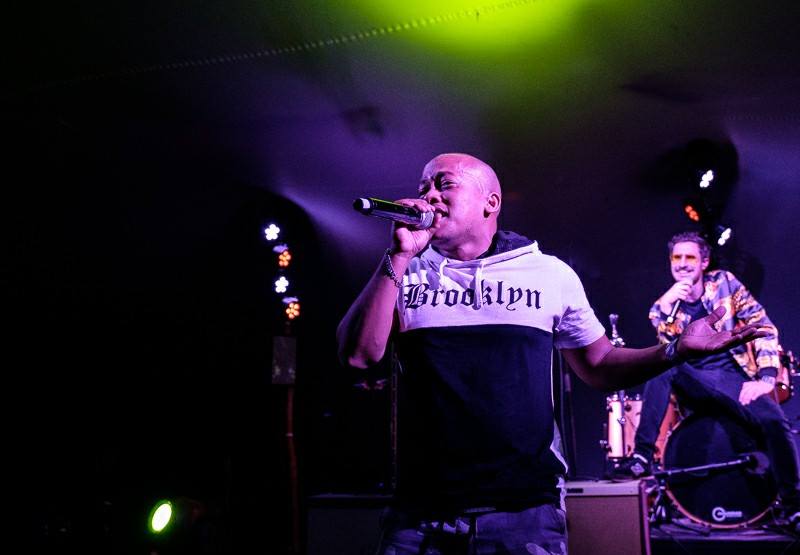 Easy Freak is generally a little too pop-oriented for my mostly rock-based tastes, but seeing their live set for the first time proves you don’t need much more than two guys to get a party going. 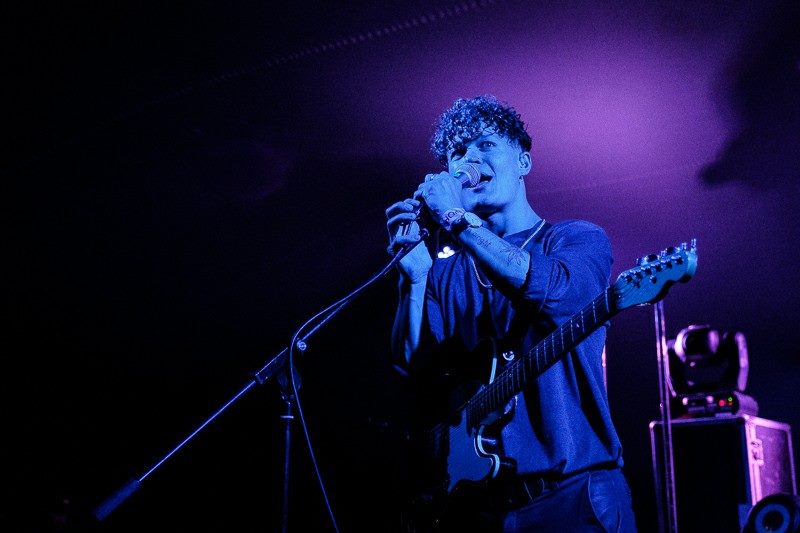 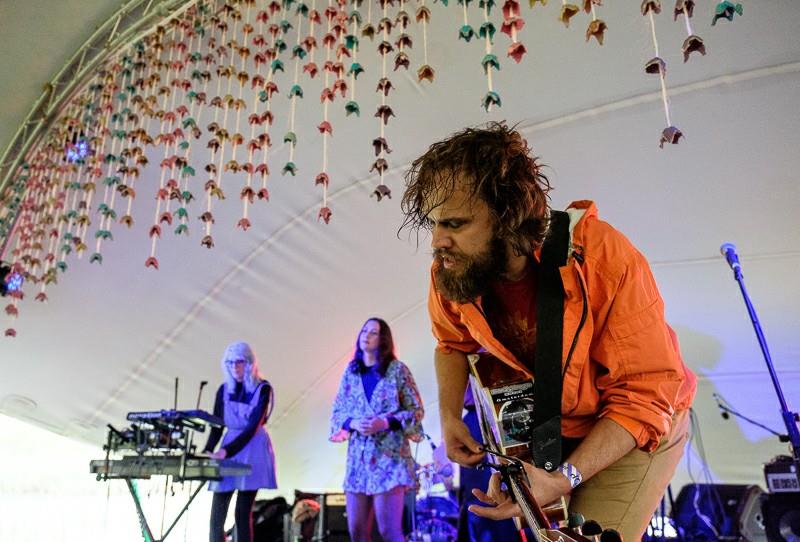 So everything at the festival wasn’t perfect — but what can you do when it’s the weather that messes you about? Yes, maybe some better communication in regards to things like schedule changes would’ve been nice, but considering Mieliepop’s serene lack of cellphone reception, I don’t know what the solution would’ve been. Considering the available resources, I think they did a wonderful job, including the posting of weather warnings on social media ahead of time. 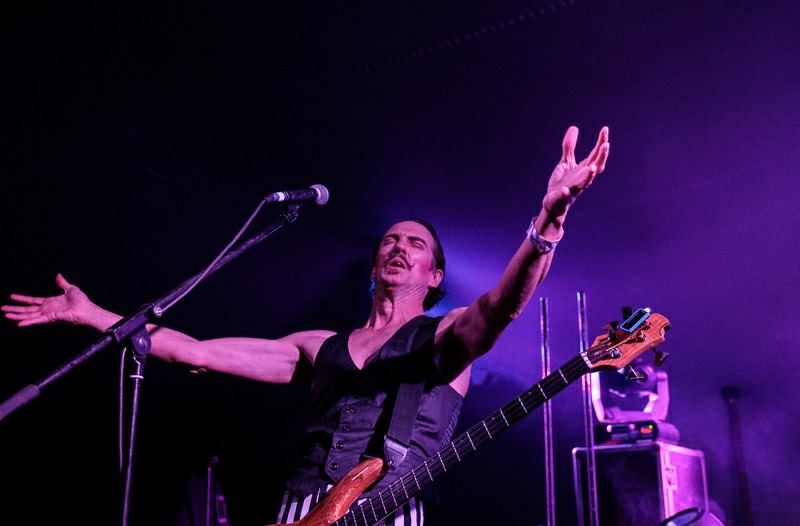 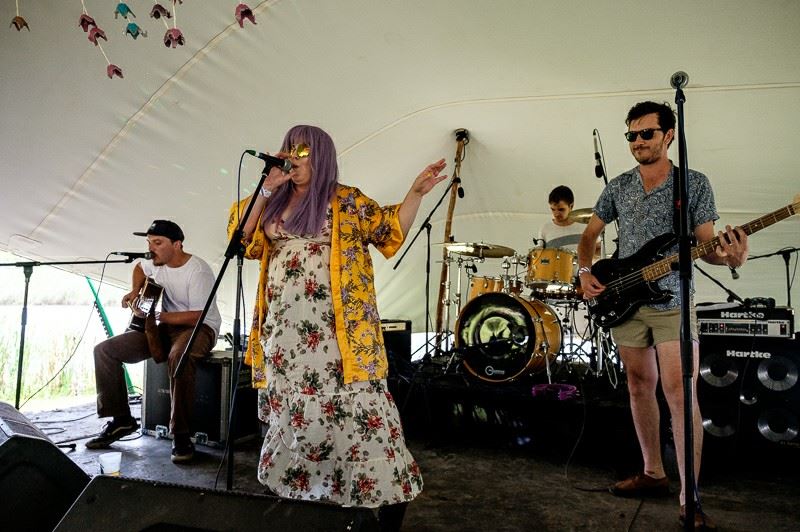 As always, Mieliepop also had great clean & warm showers, great food, facilities and views — even in seemingly never-ending rain. Add to that a pleasant atmosphere, friendly and spirited partygoers, and attendees that grow culturally and racially more diverse every year, and a small enough event that there are barely ever any queues and you never feel crowded. Although everything didn’t go exactly according to plan, Mieliepop 2018 was still an amazing, multi-genre boutique festival worth climbing the hill in the rain so you can write home about. Does anyone know when ticket sales open for 2019?

Dear Citizens of the Republic of Mieliepop. It is with great humility and appreciation that we want to say THANK YOU! Our people have endured great hardships and challenges over this weekend's festival and at times it seemed like all hope was lost. Yet, even during our darkest hour our comrades remained hopeful and optimistic. Your spirit remained unbroken and your will to have a good time endured. For this we wish to express our deepest gratitude. When the going gets tough, the tough gets going. Our people have shown themselves to be tough as nails and our little Republic is stronger for it. Also, to the artists, the technical crew, the stage managers, the food vendors, the bartenders, the security personnel and the cleaning staff, we are greatly indebted to you for your unwavering commitment to keep the event going in spite of the elements. Things did not go as planned and yet all people involved channelled their inner Bear Grylls and followed his motto: Improvise, Adapt, Overcome. We hope that you all are safe and warm and clean and we trust that the stories will be told for many years to come. "The weather tried, but #Mieliepop2018 thrived!!" PS: We'll be posting the lost and found later today. . . . #mieliepopfestival #republicofmieliepop #festivaljunkies #festivalchasers #igerssouthafrica #meetsouthafrica #southafrica #goodtimes #green #friends #people #weekend #stage #sound #musician #ilovemusic #music #festivallife #festival #musicislife #musicfestival #southafrica #travel #outdoors #mieliepop #festivals #sun #jagermeister #igerspretoria