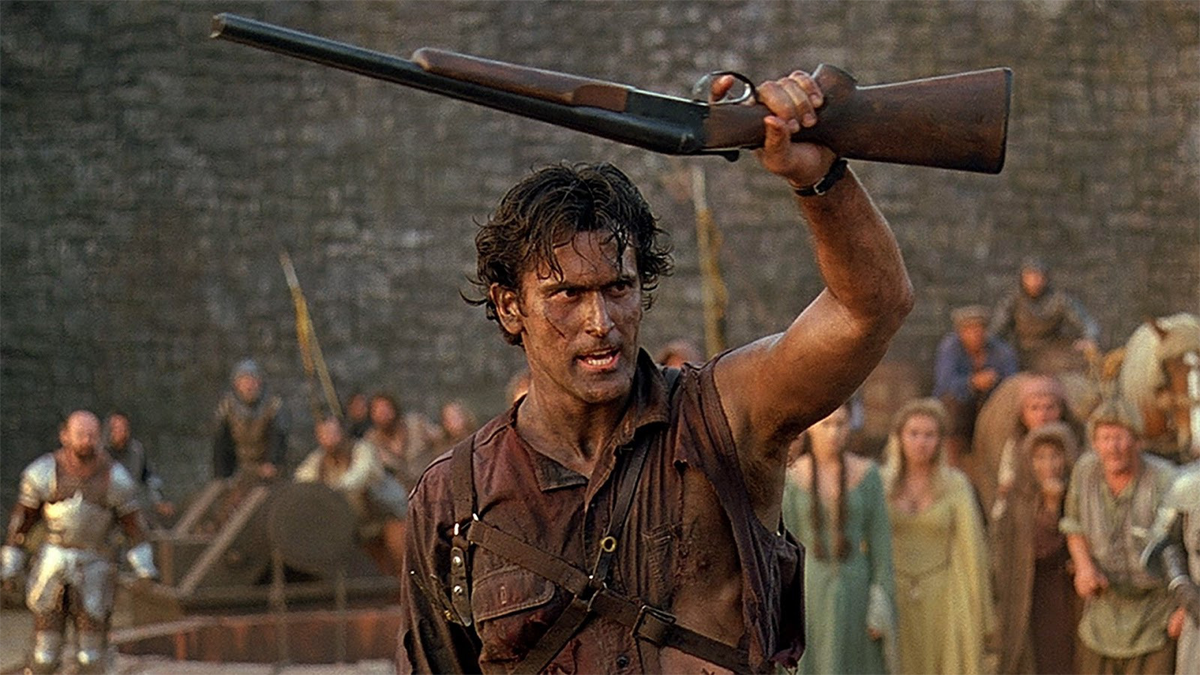 An Ode To Ash Williams

With the world getting ready for Halloween this weekend, another fandom is eagerly waiting to step out of the darkness back into the world again. This weekend sees the premiere of the brand new Starz television show, Ash vs. The Evil Dead.

Ash Vs. The Evil Dead will see Bruce Campbell reprise his role as Ash, battling the Deadites again in what promises to be a delightfully gory series. This show is set 20 years after 1992’s last instalment of the original Evil Dead trilogy, brought to life by writer-director Sam Raimi and his brother Ivan. For those of you that have not yet ventured out into the woods, the first Evil Dead film was released in 1981 and followed a group of students as they find a book and tape recordings hidden in the cellar of a cabin nestled in the woods. The book, Necromonomicon Ex-Mortis (referred to as Naturom Demento in the first Evil Dead installment) is the Book Of The Dead – a book bound by human flesh and inked in blood that opens the gate to the underworld, releasing evil spirits and demons into our world.

Things did not go well for our friends in the woods. 1987 saw the release of Evil Dead II, which saw Ash and his girlfriend return to a cabin and unwittingly opening up the gates of Hell again. The film steered the franchise in a different direction, adding more action and humor to the film. It also set up the last film in the franchise, Army of Darkness (1993) which saw Ash stuck in 1300AD battling the undead with a chainsaw and a his ‘boomstick’. 2013 saw good ol’ faithful Hollywood handing us an Evil Dead reboot. The film had good scenes in as far as modern horror cinema goes, but was forgettable due to one important factor – it did not have Ash Williams. 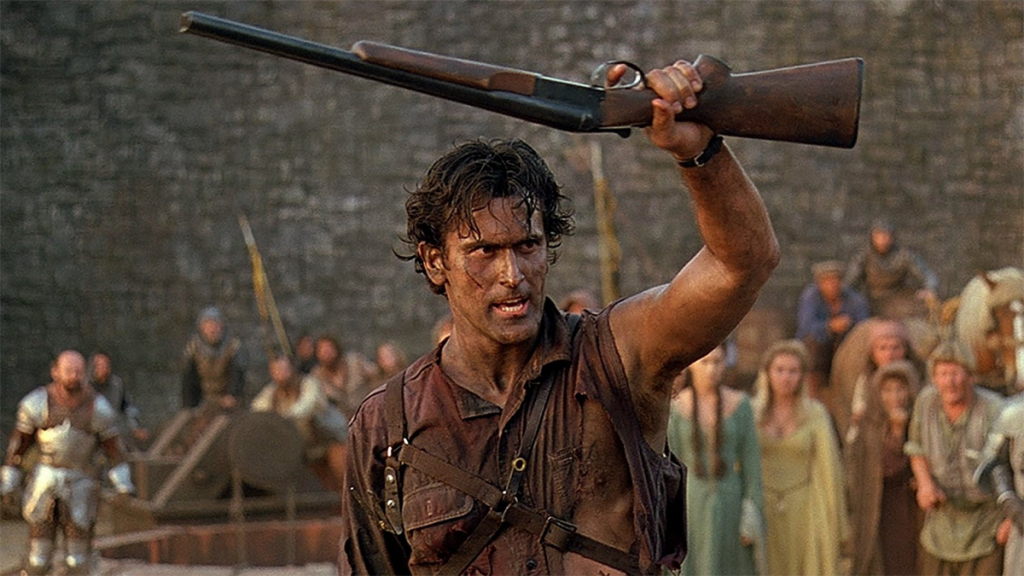 Ash Williams and his ‘Boomstick’

Ashley J. Williams, the franchise’s smooth talking protagonist is a cinematic icon. A true screen hero. A pop culture phenomenon. I’m pretty sure they based Earthwork Jim on him. The Riami’s manage to pen the perfect horror character, and Campbell’s charisma made him a screen legend and one of the most recognizable characters in cinema. Empire Magazine named him the #1 Horror Movie Character Of All Time, beating lunatic Freddy Kruger and other anti hero Ellen Ripley.  Campbell starred as himself in 2007’s My Name Is Bruce where he gets mistaken for Ash after fans of the Evil Dead series accidentally unleashes a demon on their small town. Ash is the every day man’s hero. The hero from the sky. A store clerk that does not laugh in the face of certain danger, but makes fun of it. In anticipation of Ash Vs. The Evil Dead, I’ve put together my top 5 moments of the King himself:

Major spoilers ahead if you’ve not yet seen the films.

Motivational speeches are a Hollywood norm: from sport films to army generals rallying up their troops before battle. Ash also got his turn in Army of Darkness. After he failed to recite the correct words whilst retrieving the Necronomicon, he accidentally raises the Army of Darkness and his evil self from the grave. With most of the men fleeing, Ash took to the walls of the castle to speak courage into Lord Arthur’s remaining men’s hearts before the oncoming siege.

Lord Arthur: “Are all men from the future loud-mouthed braggarts?” 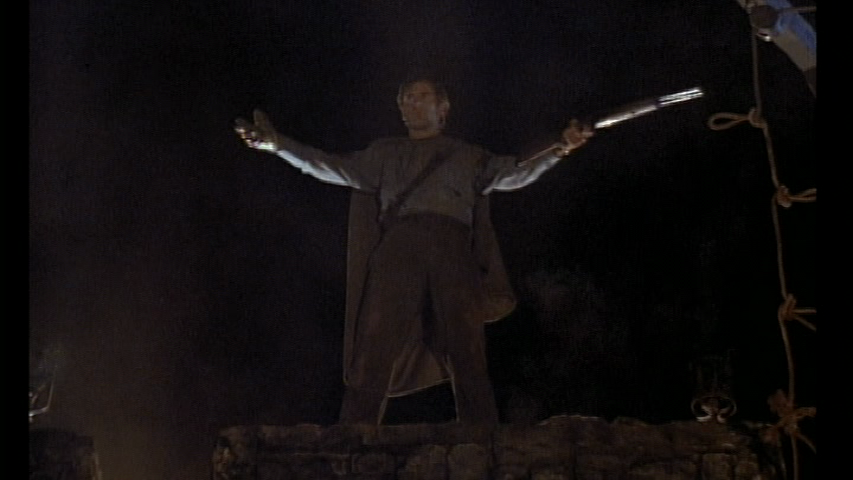 After impaling his newly possessed girlfriend, Linda, with a knife, Ash shows mercy when he can’t bring himself to dismember her with a chainsaw. He does however decapitate her with a shovel on her second attempt to eat his soul. 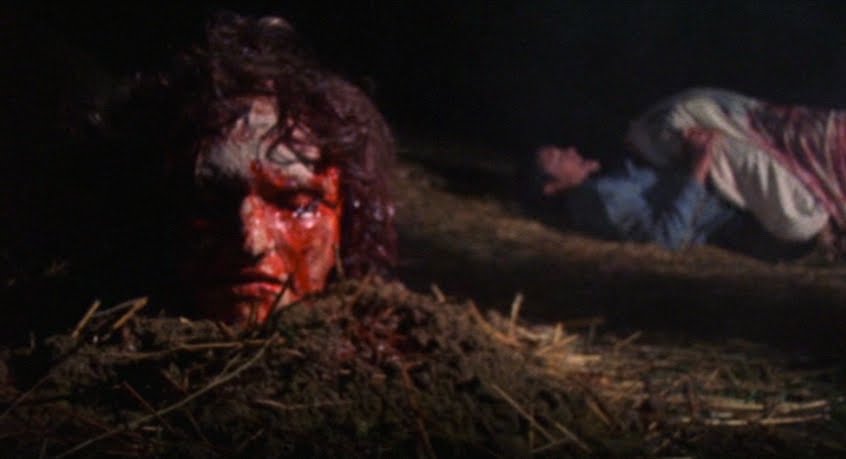 After being tormented and attacked by tiny versions of himself inside the windmill, a full-sized Ash clone is formed from his own body. And so Bad Ash is born just to have his head blown off by Good Ash. 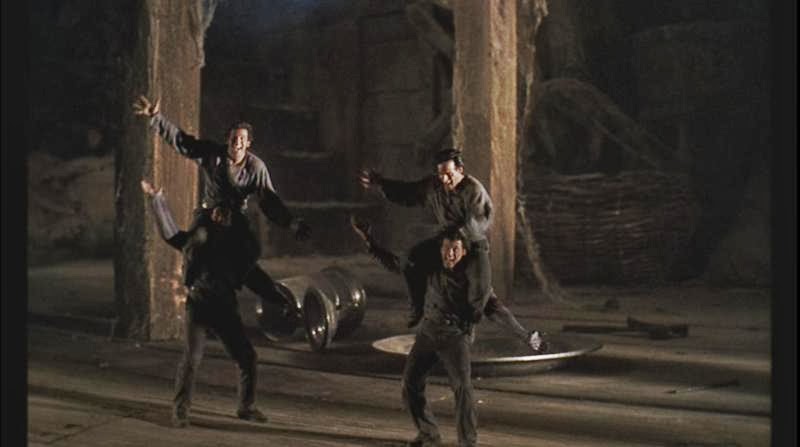 Ash is stuck all alone in the forest cabin, with evil spirits outside hot on his tail. Whilst the house is (literally) playing tricks on him, he tries to make sense of the situation by staring at himself in the mirror.

Ash’s mirror reflection: ” I don’t think so. We just cut up our girlfriend with a chainsaw. Does that sound fine?”

Ash’s hand gets bitten during a struggle with his girlfriend severed head, leaving his hand possessed with evil and trying to kill him. Like a true hero, he rises to the occasion and solves the problem the only way he saw fit – by cutting off his hand with a chainsaw. 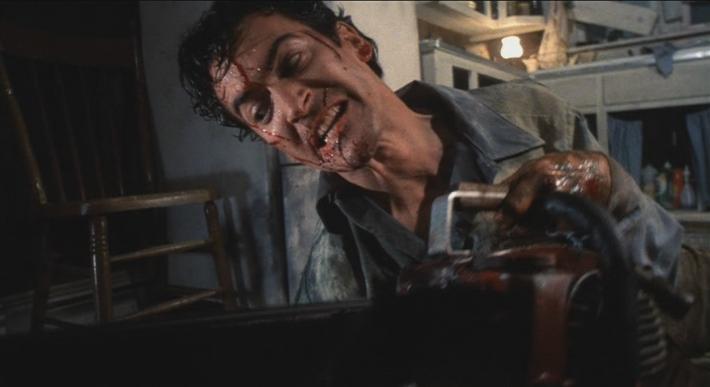 The first episode of Ash Vs. The Evil Dead is directed by Riami himself and will air on Saturday October 31st 2015. Happy Halloween everyone.